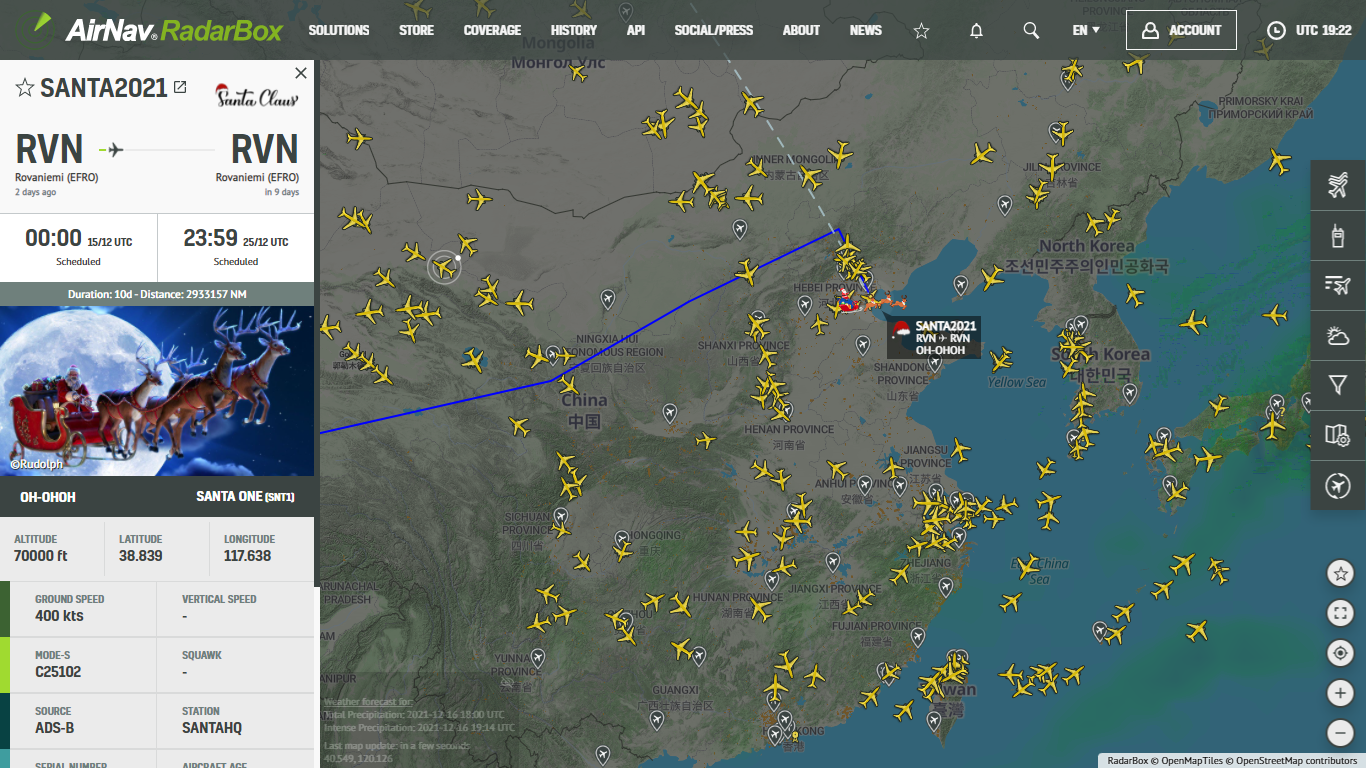 The Image Above: Santa's sleigh tracked via RadarBox.com

Ho-ho-ho! Santa's Sleigh just took off from Rovaniemi in Lapland, loaded with lots of gifts and on another Christmas journey! The Santa tracker is available on the RadarBox website, letting you follow Santa as he and his reindeer whiz by your roof.

Santa Claus lives with his magical creatures (elves and reindeer) in Rovaniemi, Finnish Lapland, surrounded by arctic nature. Every day Santa receives thousands of letters from children around the world (and even from adults). To make all this possible,  Santa is occupied all year, reviewing thousands of letters and wishes, caring for the reindeer and elves to ensure they are in good health, and preparing gifts and wrapping them for delivery. 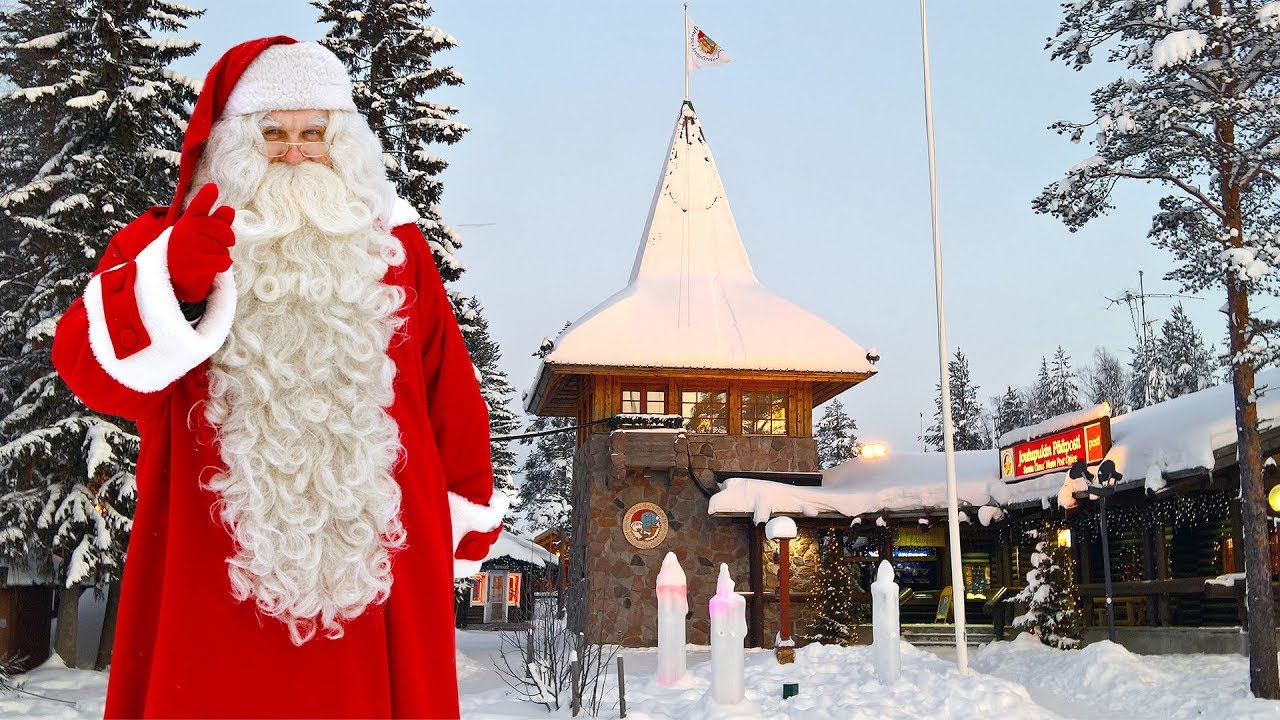 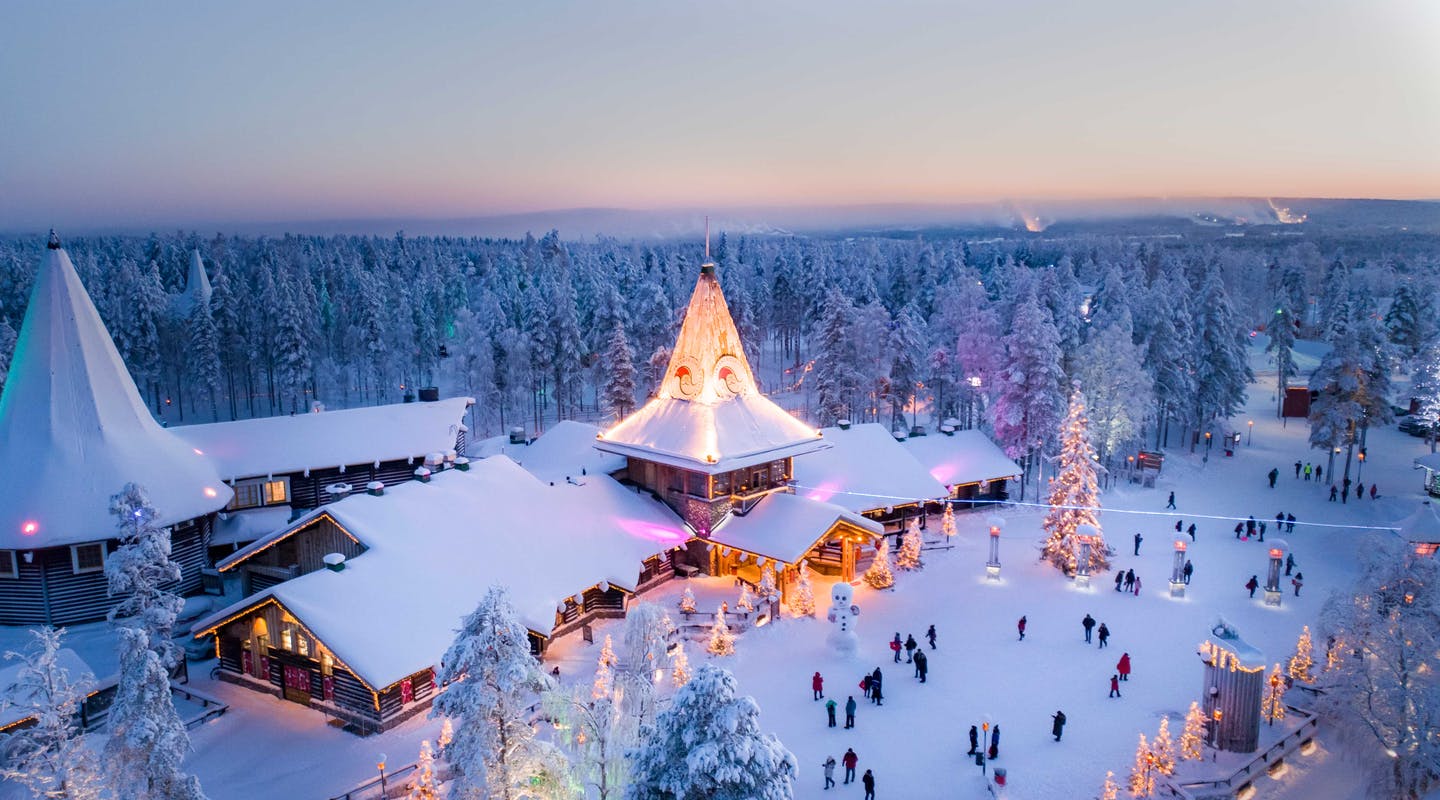 Santa's sleigh is made of wood and has been operating for over 1740 years. Nothing good maintenance can't do, hmm? Santa's sleigh was designed to accommodate thousands of gift packages and travel over long distances and has a range of +1,000,000 miles! Impressive, isn't it? Dasher, Dancer, Prancer, Vixen, Cupid, Comet, Donner, Blitzen, and especially Rudolph, the leading reindeer that lights up the skies with its bright red nose, are in position for yet another Christmas mission. Reindeers are the only earthly beings capable of taking off, due to their unique magic (the Christmas spirit). 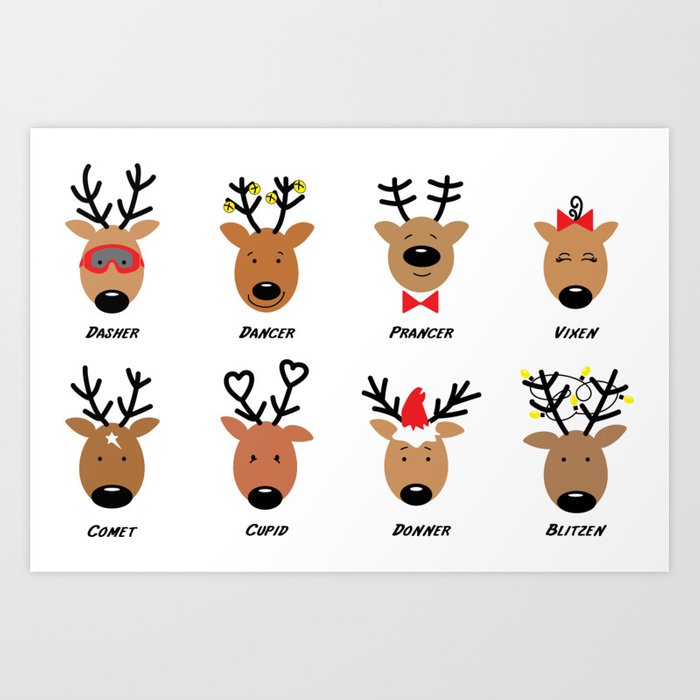 Dasher gets his name because he is the fastest reindeer of the whole pack. He used to be the lead reindeer but was replaced by Rudolph because he kept going too quickly, and the rest of the group couldn’t keep up! He first caught Santa’s eye as a young calf when he challenged all of the older reindeer to a race and comfortably beat them all. Every day since he has not stopped trying to race the other reindeer which really gets on their nerves because they all know he’s going to win! Because of his natural speed, Dasher can get a bit complacent and often doesn’t turn up to sleigh riding training, so Santa sometimes has to tell him off!

The reindeer with the most flair and elegance, ever since Dancer could walk, all he wanted to do was dance. Constantly putting on performances for the other reindeer, Dancer was even offered a contract to perform on Broadway but his ultimate dream was to work for Santa and help deliver presents on Christmas Eve. Along with his twin brother Prancer, he studied hard at the Reindeer Aviation Academy in Lapland in order to graduate with his Christmas Wings and achieve his ambition.

Prancer is a supremely graceful and majestic reindeer, just like his twin brother, but he is all too aware. Every Christmas Eve, Santa Claus has to drag him away from preening himself in the mirror and polishing his horns to go and deliver the presents on time. Prancer and Dancer are tied next to each other in the pack so that Dancer can keep an eye on his easily distracted twin brother.

Voted as Reindeer Monthly’s most beautiful reindeer of all time, Vixen always attracts a lot of attention from male reindeer. Cupid in particular is totally besotted with her prettiness and elegant flying style. It is no secret that Vixen enjoys this interest however, as she is known as a notorious flirt and will flutter her long eyelashes at anyone to get her way.

Comet is the strongest of all the reindeer and is known for being a stubborn but loyal member of the team. He was named after an enormous comet that flew through the skies at the same moment he was born, which would foretell Comet’s future as a famous flying reindeer.

Cupid is the most romantic and passionate of all the reindeer. Born on Valentine’s Day, Cupid has taken it upon himself to act as match-maker amongst the Lapland reindeer but unfortunately has not been as successful with his own love life as he has with the others, like celebrity couple Rudolph and Zoey. Madly in love with Vixen, he is constantly trying to impress her, although Santa had to separate the two of them since Cupid kept flying into obstacles as he was unable to take his eyes off her.

Sometimes known as Donder and Dunder, Donner’s name means “thunder” and she is not a reindeer to be messed with! Married to Blitzen, they are the mum and dad of the reindeer group and have to discipline the younger ones if they step out of line. Donner looks after the others, from making sure their hooves are clean, to cooking hearty meals before their long journeys distributing presents.

Husband to Donner, Blitzen is the bravest member of the team, never one to back down or give up in the face of adversity. He encourages the rest of the team even through the toughest storms to make sure that they successfully deliver their presents in time for Christmas morning. His name means “lightning”, some people say because he has been struck so many times, and together with Donder, they make a formidable couple that are the backbone of this magnificent bunch.

Rudolph is the youngest and most famous of all the reindeer, universally celebrated for his heroics in the storm of 1939. How he was born with his legendary bright red nose, no one knows but children all over the world are very glad he was as he has led the team through many wintery nights as a shining beacon. At first, Dasher was not very happy to have been replaced as lead reindeer but after seeing how well Rudolph could guide the sleigh through even the thickest fog, he was quickly won over and only too happy to act as second in command.

Celebrating its 1741st anniversary, Santa is ready for another Christmas mission! Santa Claus will be flying with his 9 flying reindeer all over the world at 70,000 feet and 400 knots, distributing gifts and positive energies to those who have behaved well this year.

How to use RadarBox Santa tracker

To track Santa on RadarBox is simple, click on this link, or open the "Media" tab displayed on the left side of the RadarBox map and find the item "Where is Santa at right now?". Then click on "Track Santa". According to Santa's flight plan, he will land on December 25th at 23:59:59 (UTC) in Rovaniemi. So be sure to track him on RadarBox! 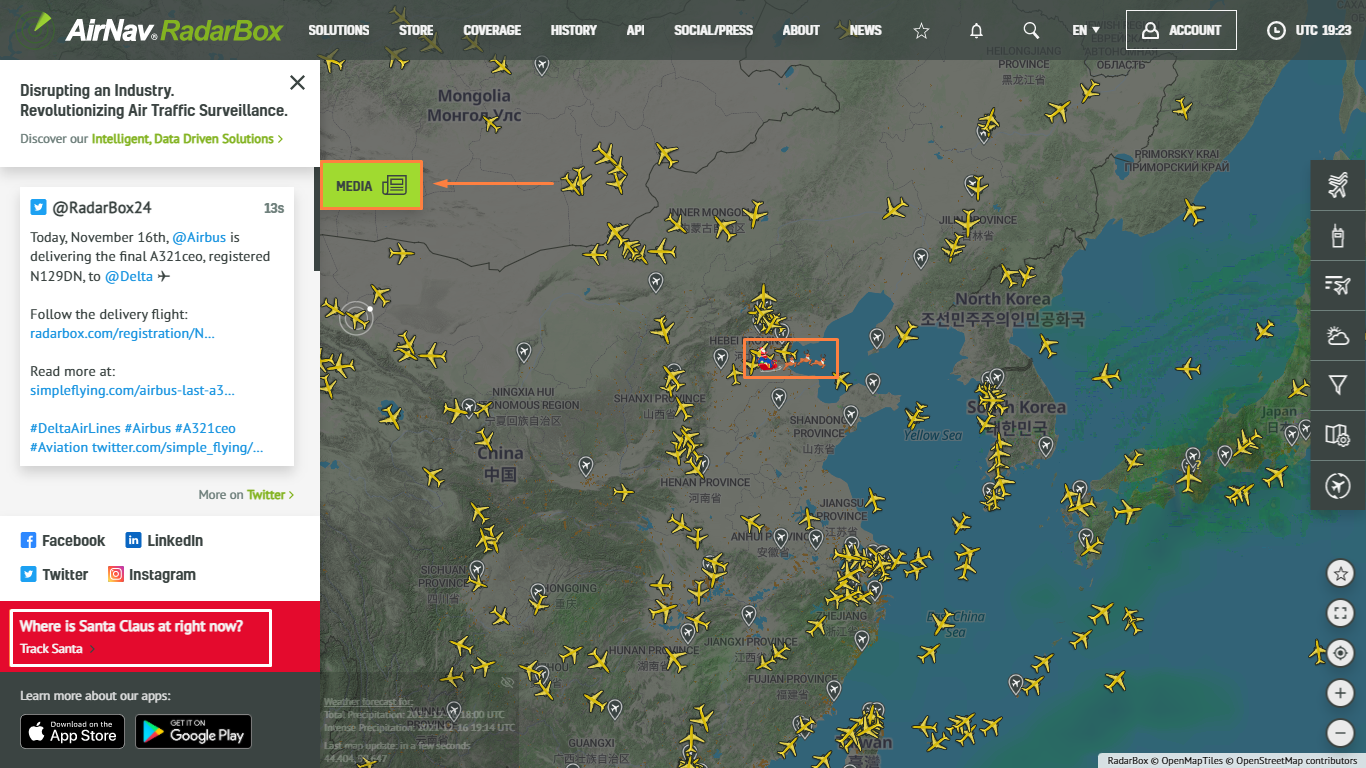 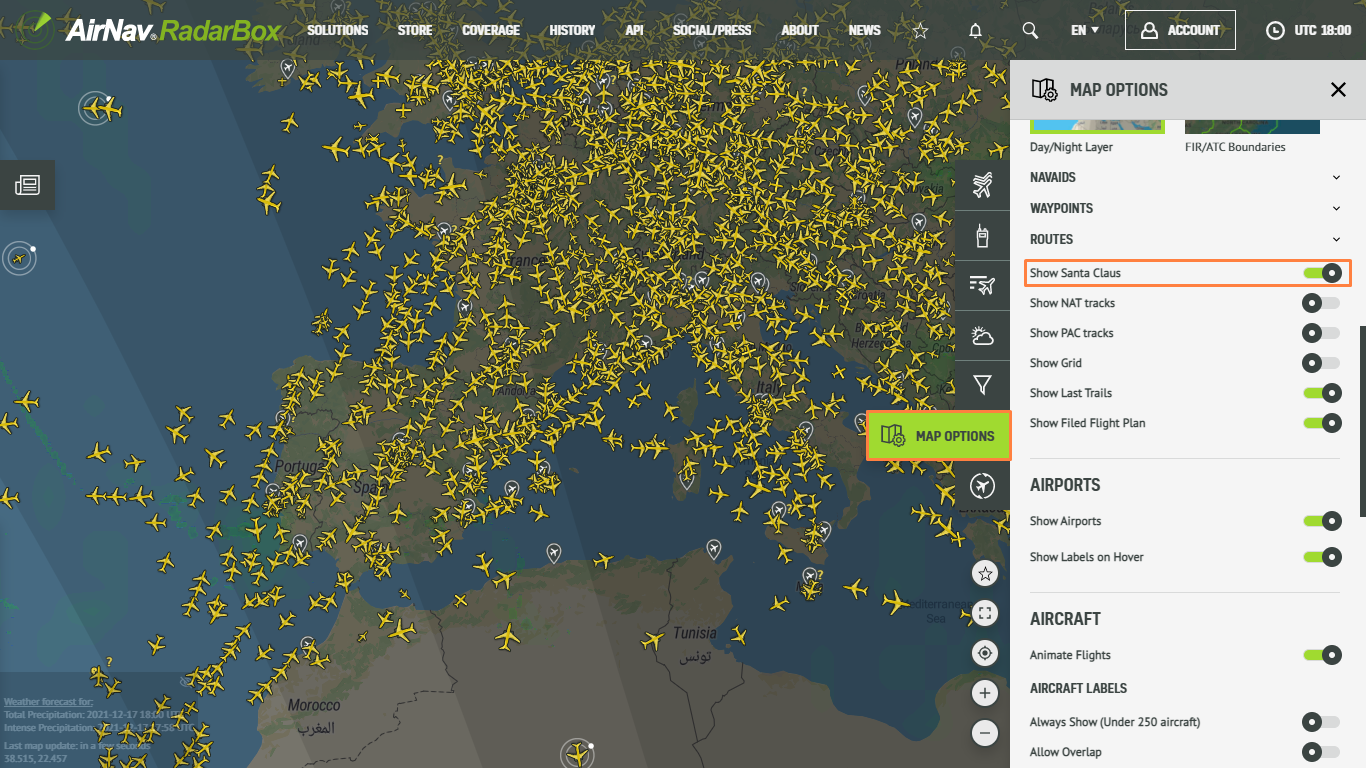 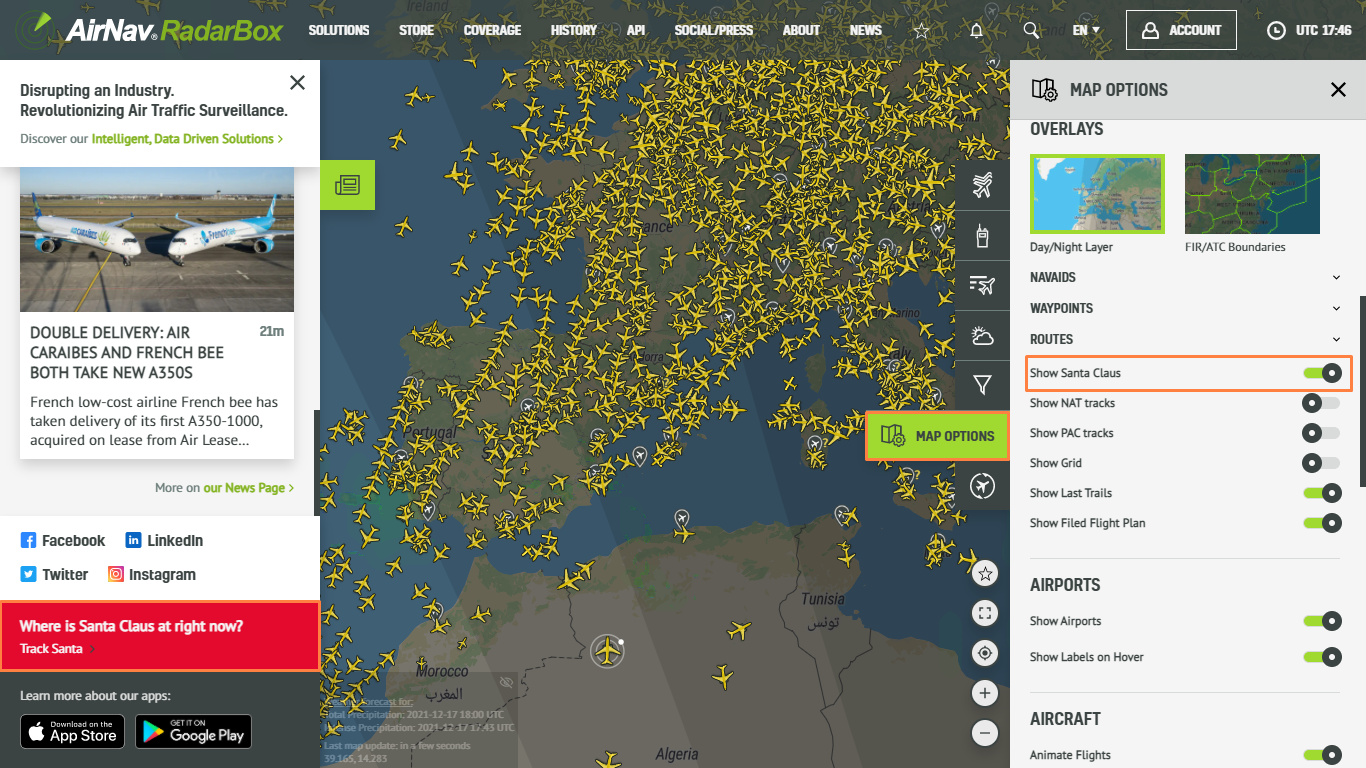 By clicking on the "Cockpit View" option, you'll be able to see the same view that Santa sees as he delivers gifts all over the world! 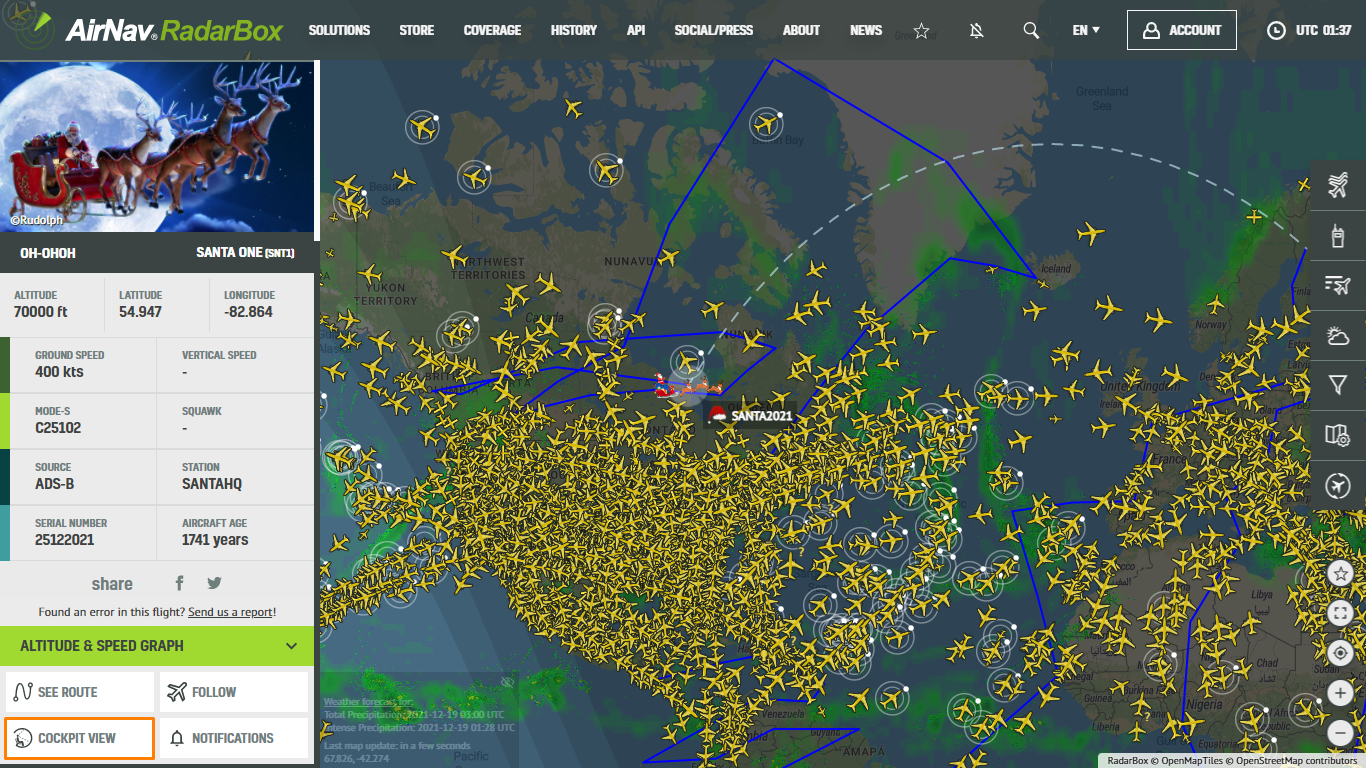 The Image Above: Cockpit View on RadarBox.com 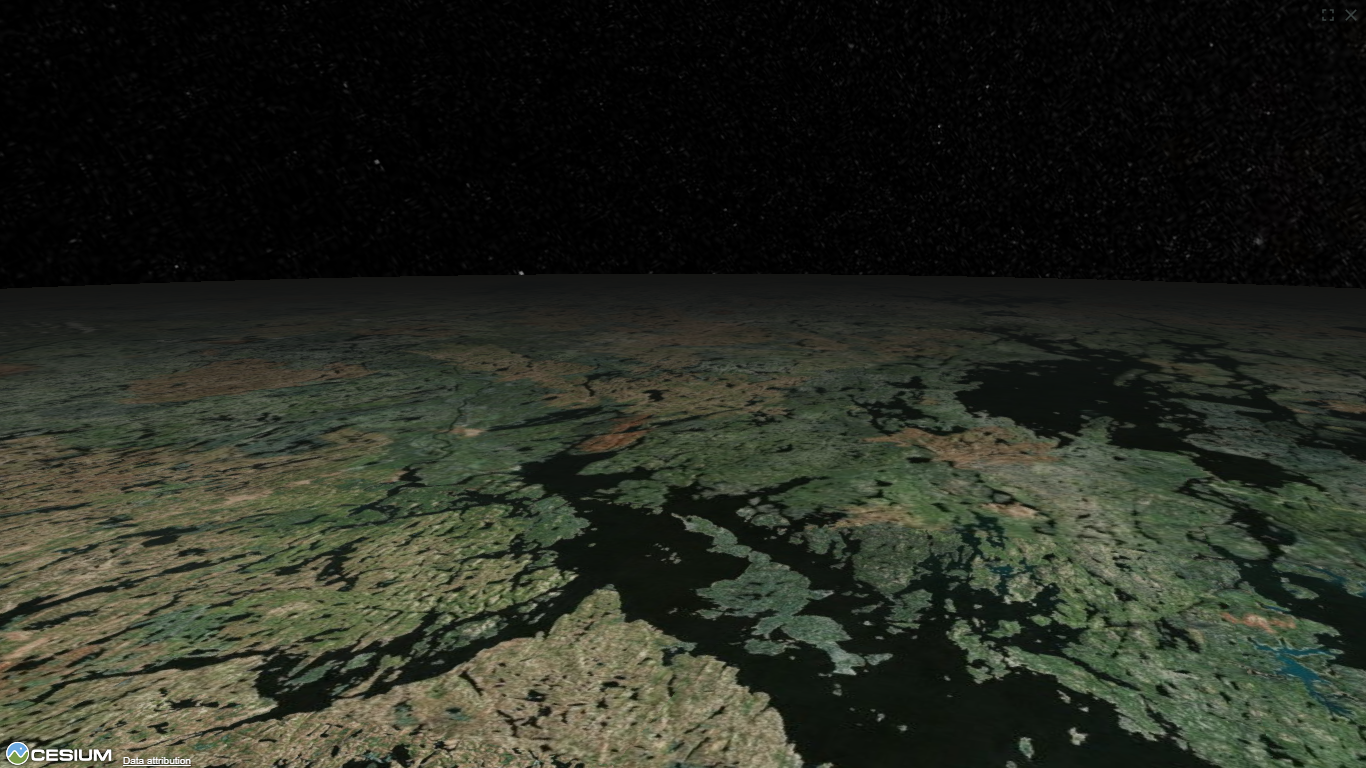 The Image Above: Sleigh View (Santa's cockpit view) on RadarBox.com

The flight card below displays the sleigh's age, serial number, and other information. And, of course, the Santa Claus icon and a photo with his reindeer! 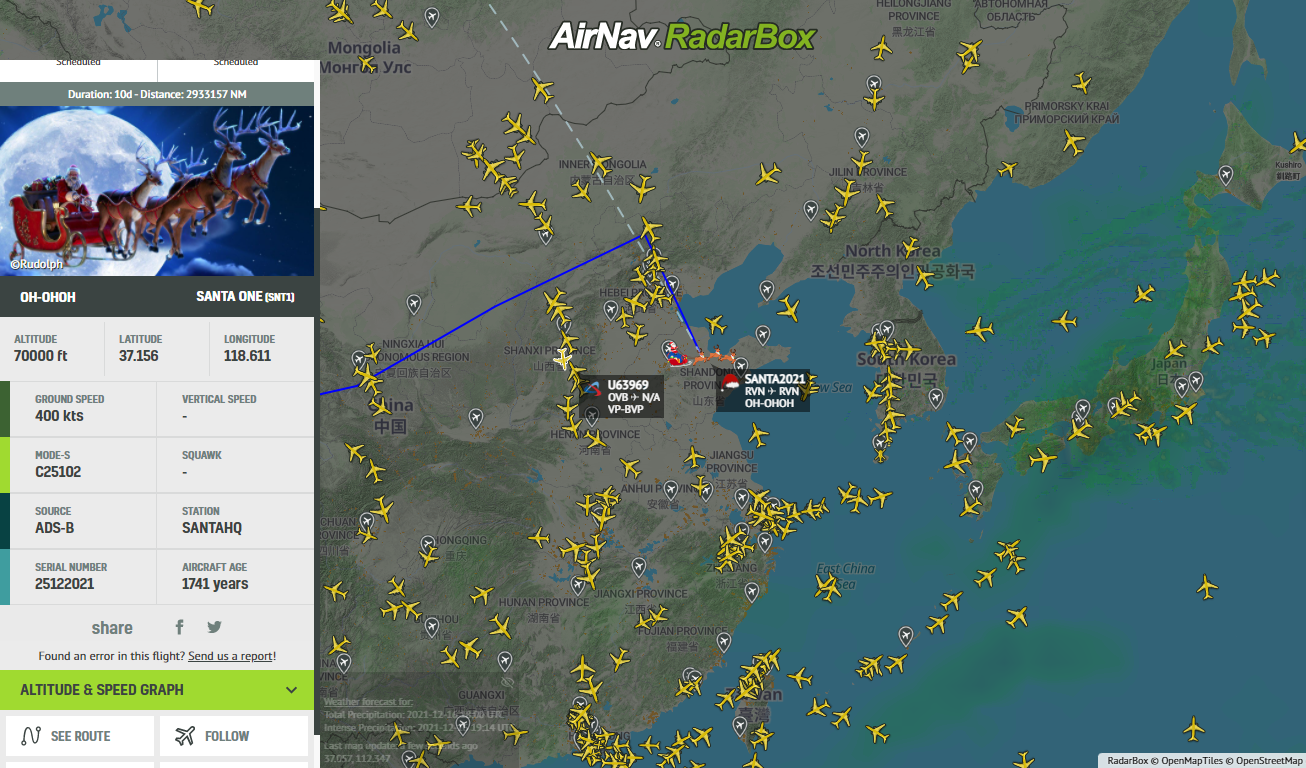 AirNav RadarBox's gift to you - Use promo code RBXMAS to get 30% off on all RadarBox Subscriptions! Subscribe now - https://www.radarbox.com/subscribe 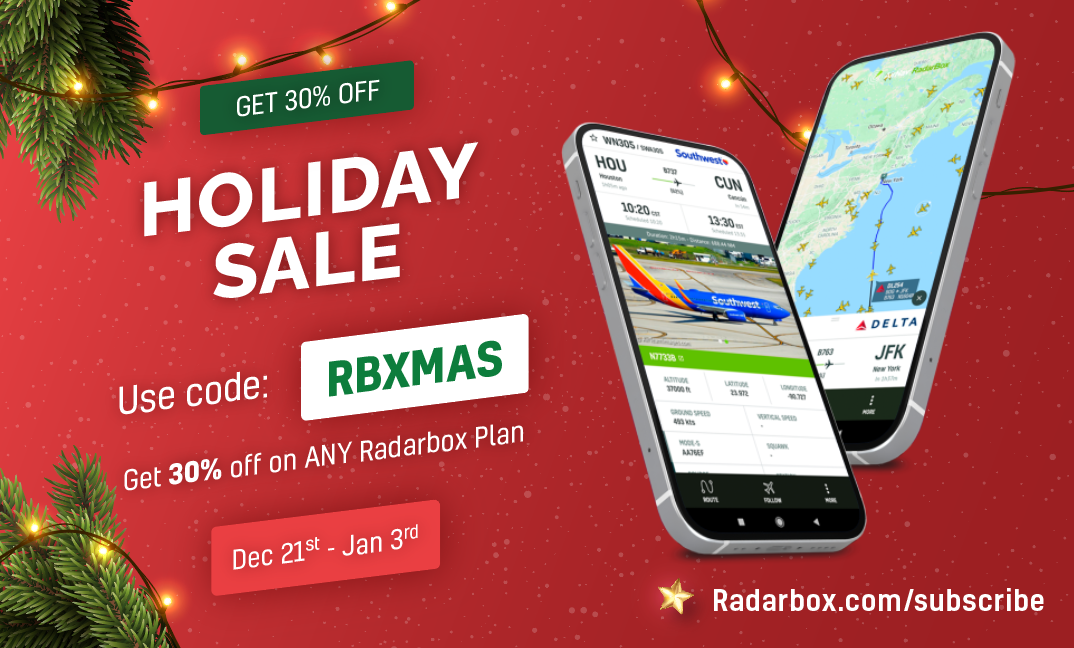