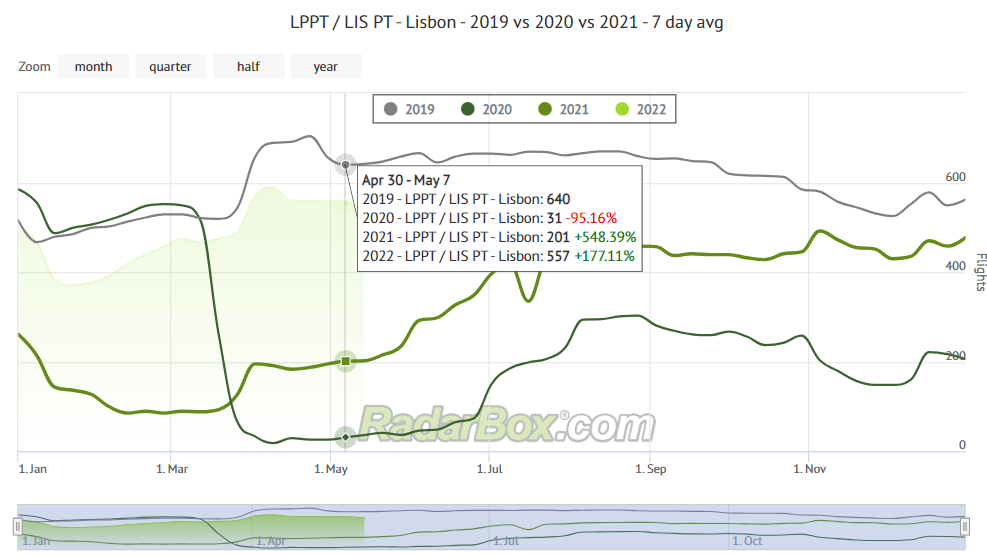 The Image Above: Airport Movement Statistics for Lisbon Airport, Portugal.

The airport is approaching figures similar to that of the pre-pandemic era in 2019, which is a significant step in the right direction for Portugal's capital airport.

As the Summer 2022 season nears, this figure will only continue to rise.

For April 30-May 7, the airport recorded 557 movements, which represents a +177.11% increase compared to the same period last year, when 201 movements were recorded.

2021's figures are still higher than that of 2020, where just a measly 31 movements were recorded.

For this week, numbers are expected to remain similar, with 531 movements expected, which is +162.87% more than the same period last year.

What About Other European Airports?

Based on the table you can see above, Lisbon on a daily basis is still performing less than some of the other major airports around Europe.

For airports such as Rome and Oslo, you can see Lisbon has caught up nearly to those airfields.

Whilst it may not be fair to compare some of these airports to the likes of Heathrow, Istanbul, Frankfurt, and others, it does give an indication amongst the other airports about how much more work is needed.

Recovery is not that far away for Lisbon, but we will probably see these numbers increase dramatically in the Summer.