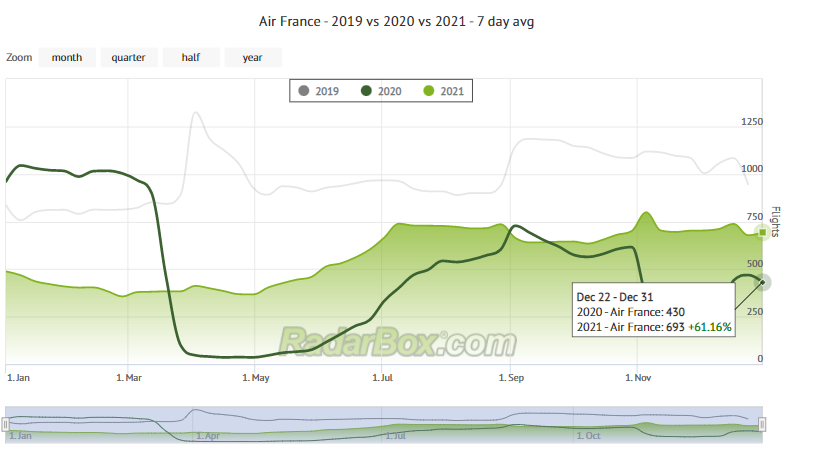 The Image Above: Statistics based on the number of Air France flights due to occur between December 22-31, 2021.

As we approach the end of the year, Air France wishes to end it on a high by recording strong double-digit growth in flight movements.

The airline has been on momentum throughout December, with the airline recording the following increases:

Whilst movements dipped between December 17-24, they are steadily increasing to the near-700 movement mark, which is good news.

The carrier's year in review for movements has been far more positive, with high percentage increases recorded in March 2021, where the airline was operating over 900% more flights than it was in March 2020.

This comes as no surprise given the fact that at that time, the world was beginning to re-open again following severe COVID-19 restrictions.

Such triple-digit percentages however did turn into positive double-digit increases, with it averaging anywhere between 25-80% for 2021 as a whole.

With Omicron hitting Europe hard, we could begin to see such flight averages decrease once again as the globe gets ready to deal with this new variant.

That being said, with symptoms being reported as milder, this may not affect things for the French carrier, but again depends on government intervention and how severe it will be with such restrictions.